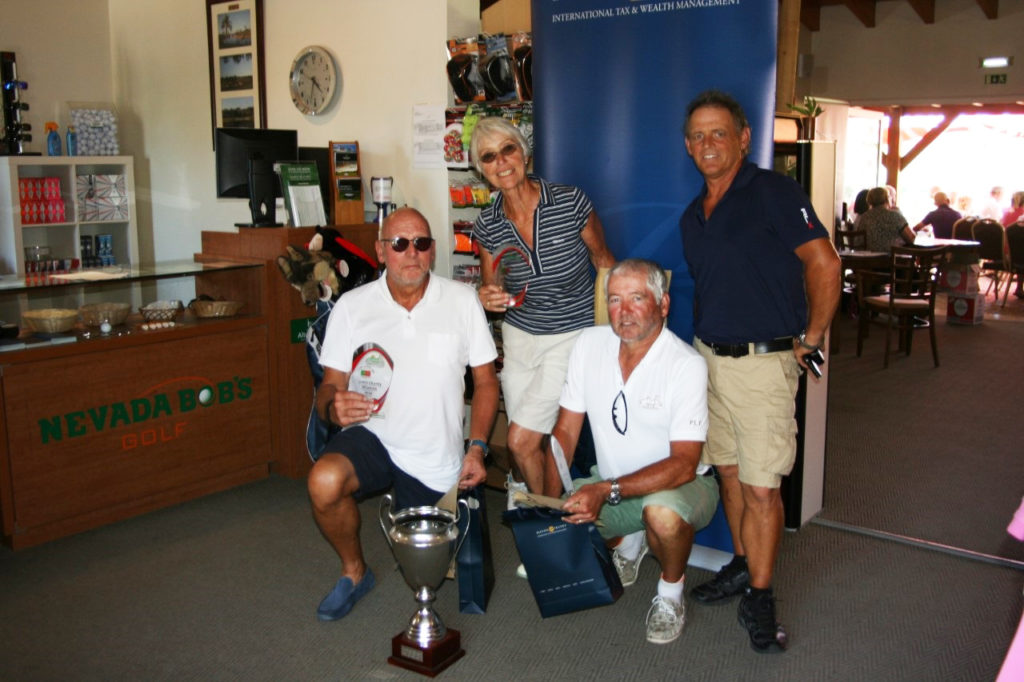 This 2019 Silves Charity Golf Day, jointly hosted by the Silves International Club de Golf ((SICG) and Sierra de Monchique (SdM) golf clubs, was held recently at the magnificent Pestana Silves course. A fantastic sum of almost €5,500 was raised for the Algarvean Oncology Association (dedicated to cancer diagnosis and support) and the Santa Casa da Misericordia de Albufeira (provider of homes and support for children). Supported by the wonderful generosity of members, guests, and event sponsors, over 90 players participated in a memorable day of Seattle Shambles golf to raise the fabulous sum to now be shared between the charities. This annual tournament has become an established fixture in the golfing calendar since the inaugural event five years ago to support organisations in the community. The golf was followed by a BBQ lunch, terrific musical entertainment, chipping competition, and finally an auction to further boost funds already generated from the event. The combined efforts of organisers, sponsors and players resulted in a truly memorable and worthwhile occasion. The golf was also so very nearly graced by a hole-in-one, when Brenda Manley’s tremendous tee shot at the par-3, 16th, saw her ball hit the flag stick, appear to be about to roll downwards to the cup, only to agonisingly ricochet away from the hole and a memorable ace. However, it was agreed that, especially with such a wonderful result for the chosen charities, all involved in the event were winners. The top team prize on the day was clinched by Gary Juster, Ulla Bischoff, Per Lars Tonstad, and Hans Van De Laar, (pictured), with all final placings as follows:

Winners of the various nearest the pin awards were: Paul Manley, Julie Barrat, Mick Greenwood, Gill Edwards, Stuart Deans, and Brenda Manley, who also won the chipping completion and the prize of a wedge club donated by Golf Shack.

Euan Pyper, Joint Charity Committee Chairman, later paid tribute to various supporters of the event, including all the members of both clubs, and in particular, Mel Huxtable, Des Briggs, Robert Haller, Julian Lyons and Alan Winstanley. Euan also praised Pestana for ‘donating’ the course for the day.

Euan stressed that: “a considerable amount of organisation was required to make the day so successful”, and that he was “especially grateful to Don Forrester, Richard and Wendy Emrich, Michele Schuijt, Karen Huxtable, Barbara Briggs and Yvonne Pyper, Mick Caudle, Martin and Pat Brand, Chris Zisimedes, Dave Darling, Jackie Smith, and Osvaldo’s team for the BBQ, all Pestana staff for such hard work in the heat, and The Poor Man’s Band for their fantastic music.”

Euan was typically keen to praise others, but one person who cannot be overlooked is Euan himself. He steps down from the event’s committee after four years of invaluable contribution to generating support for worthy local causes, and leaves a sound legacy for the future benefit of not only golfers but also the wider, local community.