SHAPING UP FOR AUTUMN 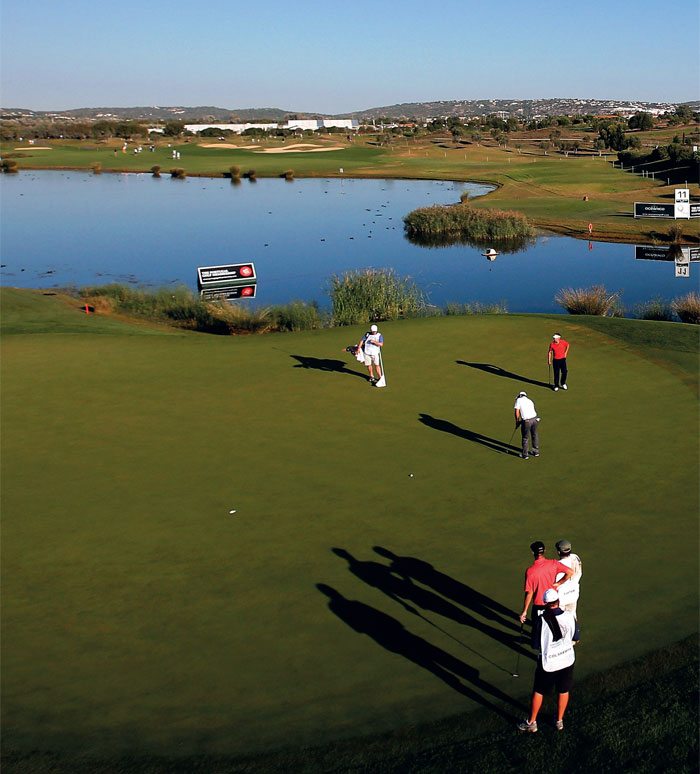 The 2014 Portugal Masters takes place from 9th-12th October and promises to offer plenty of excitement for golf fans as this year’s Race to Dubai approaches its conclusion, with many topclass golfers aiming to improve their rankings. This successful tournament, played over the 6,609-metre (7,241-yard) Oceânico Victoria course in Vilamoura with its large undulating greens, strategically placed bunkers and water hazards, this year welcomes a new sponsor in ‘Your Golf Travel’ which has announced special offers for visiting golfers including free tickets to the event and is also organising entertainment activities in Vilamoura during tournament week. Last year, a deserving winner of the 7th Portugal Masters appeared in the form of tall Englishman David Lynn when he was just shy of his 40th birthday. The win in Vilamoura came a year after his heroic, lucrative runner-up spot in the 2012 USPGA Championship, when he came from behind to post a brilliant final round of 63 for his second European title, scoring 18- under-par 270. Meanwhile, South African Justin Walters sank a tricky 40-foot putt on the final green for second place, only one stroke adrift, and emotionally dedicated this result to his mother who had passed away only two weeks previously. Tied in third on 16-under were Stephen Gallacher (Scotland), Bernd Wiesberger (Austria) and Paul Waring (England). Gallacher’s compatriot, Scott Jamieson, scored a fantastic 60 in the 3rd round, with his chip on the last for 59 agonisingly lipping out of the hole and although breaking the course record, he eventually tied for 13th.  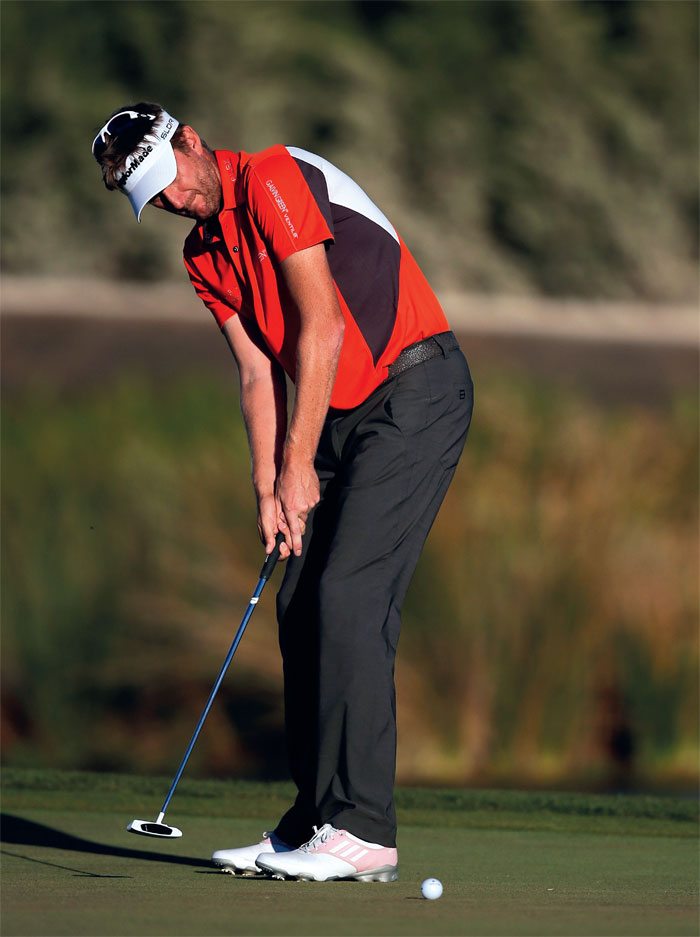 In 2012, Irishman Shane Lowry, winner of the 2009 Irish Open as an amateur, took the Portugal Masters title with a score of 270, one better than Ross Fisher. Lowry’s second shot straight into the par-4 eleventh hole spurred him on to a famous victory in front of many fans from the Emerald Isle.

Young Tom Lewis from Welwyn Garden City had an amazing whirlwind 2011 after scoring 65 in the Open Championship – a record for an amateur and a share of the 18- hole lead – followed by a win at the Portugal Masters in only his third pro event, aged just 20, with a 21-under-par aggregate, two shots better than Rafael Cabrera-Bello.

Left-hander Richard Green took the title in 2010 scoring 270 (-18). He held the early 72-hole clubhouse lead after carding 65, but surprisingly none of the leaders before the home stretch could dethrone the Australian, with four players ending equal second on 272.

In 2009, it was Lee Westwood who won the Portugal Masters, requiring a 23-under total to edge out Francesco Molinari by two strokes, with Padraig Harrington a further two behind. Lee almost won the shot-ofthe- year prize with a miraculous pitch to tap-in distance, delicately played over bushes to a green sloping perilously down – ward to the lake flanking the 17th green. 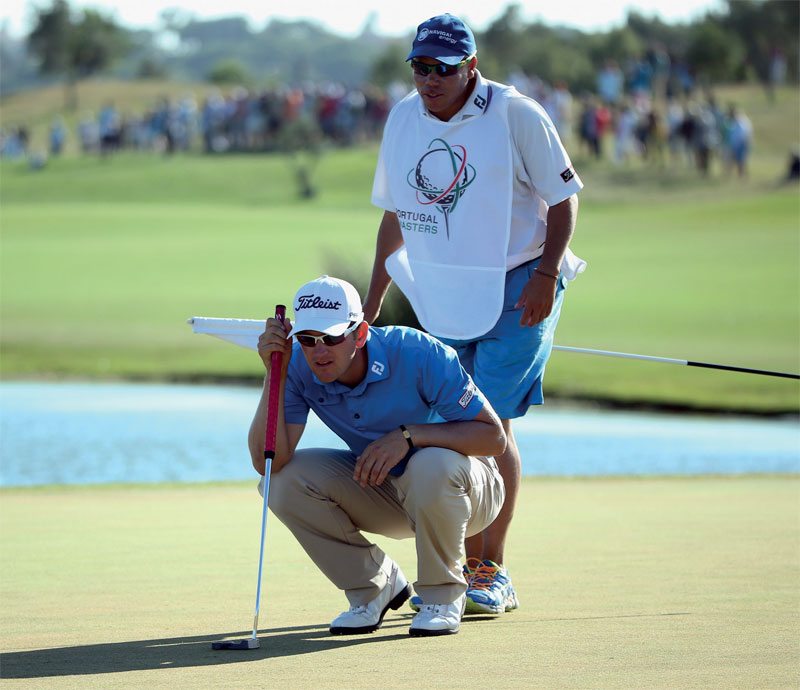 Back in 2008 the Portugal Masters was won by long-hitting Álvaro Quiros from neighbouring Andalusia, and now sponsored by the Oceânico Victoria course. He mostly kept his ball on the fairways and his short game was spot on, ending with a total of 269 strokes (19 below par). Paul Lawrie was runner-up, three strokes off the pace.

At the inaugural Portugal Masters in 2007, Englishman Steve Webster scored a final round of 64 and a magnificent aggregate of 25 under par to take the title. Robert Karlsson was runner-up and although Martin Kaymer was quick out of the blocks after scoring 11 birdies for a brilliant 61 strokes in his opening round, he eventually finished in a tie for seventh.

The complete history of official professional golf events in the Algarve actually started in 1973 when the Portuguese Open was held at Penina. Up until then, this Open was always played at the well-established Estoril course near Lisbon where golfers such as Peter Allis, Flory van Donck, Ramon Sota, Max Faulkner and Ken Bousfield all won the ornate silver trophy in the 1950s and 1960s.

The Portuguese Open was last held in 2010 when Thomas Bjørn triumphed at the Trent Jones Jr.-designed Penha Longa course in the Sintra foothills. Recently, the successful Portugal Masters has succeeded the Portuguese Open as the country’s flagship pro golf tournament and is now firmly established as part of the PGA European Tour calendar.

Since that very first Open at Penina where Spaniard Jaime Benito edged out Bernard Gallacher in a play-off, the Algarve has steadily developed as an attractive venue for important pro tournaments. This complements and promotes the status of the Algarve as an ideal year-round holiday destination and a region for retirement, with pleasant weather, as well as attracting large galleries to watch star players in top competition. In total, the Portuguese Open was staged in the Algarve 23 times with the last being in 2006.

Notable winners of the Portuguese Open in the Algarve include Howard Clark (Penina 1978), Sam Torrance (Penina 1982), Zimbabwe’s Tony Johnstone and Mark McNulty (  do Lago in 1984 and 1986 respectively), and Colin Montgomerie, whose 1989 victory by a record margin of 11 strokes, also at do Lago, launched him on an outstanding career including eight European Tour Order of Merit titles and success in the Ryder Cup as player and captain. This year Monty has won two Majors on the US Senior PGA Tour, known officially as the Champions’ Tour.

Penina hosted the Portuguese Open a total of ten times and Quinta do Lago eight. The influence of John Stilwell, together with that of the Penina hotel management and Sir Henry Cotton, was instrumental in attracting the country’s Open to the Algarve, especially with the availability of TV coverage to showcase the destination. Quinta do Lago developer André Jordan was the driving force behind staging the event at this venue, starting in 1976.

One of the particularly interesting Portuguese Opens was the 1992 edition held at the Donald Steel-designed Vila Sol course, which had been officially open for play for only a few months. The winner was Ronan Rafferty from Northern Ireland with a 15-under-par score of 273, two better than Anders Forsbrand. A major highlight was Spaniard José Maria Cañizares’ brilliant third-round score of 62 (10 under par). The 1993 event, also at Vila Sol was won by England’s David Gilford.

Vale do Lobo also staged the Open twice – in 2002 and 2003 – both won by Swedes, Carl Pettersson and Fredrik Jacobson respectively, who have since enjoyed success on the main US PGA Tour. Despite such notable successes, however, recently it has been difficult to secure sponsorship to stage both the Portuguese Open and the Portugal Masters in mainland Portugal although the Masters has proved to be highly successful and offers a respectable prize fund of €2million.

André Jordan, whose company acquired ownership of the Vilamoura resort in late 1995, had improvements made to the three existing golf courses and also invested in building the Millennium and Victoria courses, before selling off the golf assets to the Oceânico Group in 2007. The Victoria Course opened in 2004 and the following year was the venue for the World Cup, which is played throughout the globe every second year as part of the World Golf Championship events which are classified in importance one step below the four annual Major Championships. This year’s Portugal Masters certainly promises competitive, top class golf and is sure to be a great occasion for both players and spectators.

SHAPING UP FOR AUTUMN