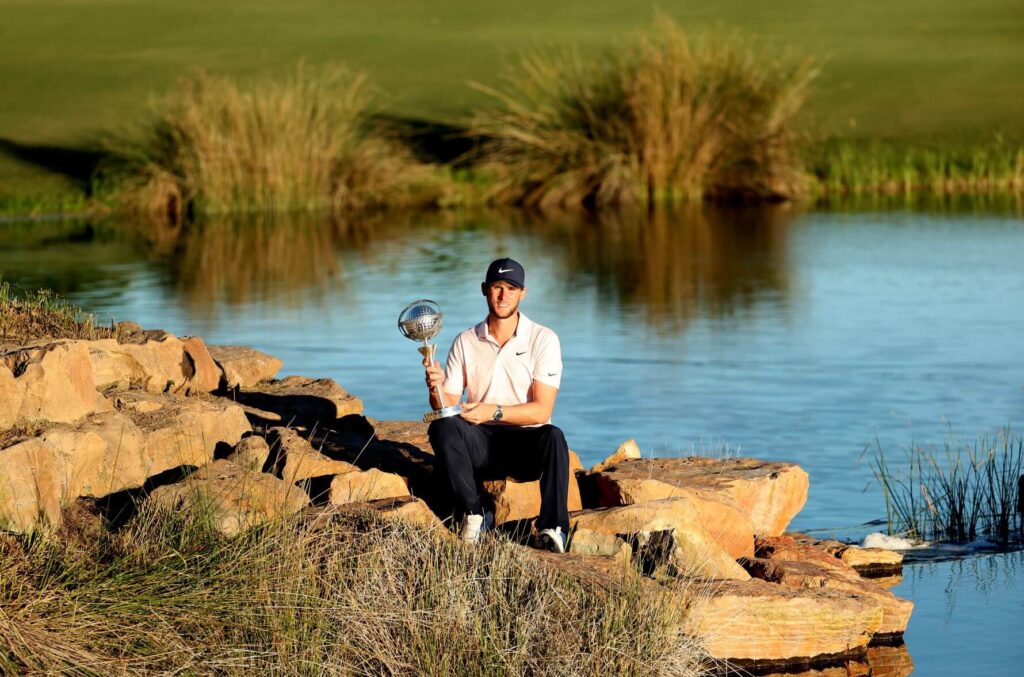 Delightful winter sunshine in the beautiful Algarve provided the glorious setting for yet another dramatic Portugal Masters at the Dom Pedro Victoria Golf Course in Vilamoura. Thomas Pieters, Belgium’s former Ryder Cup star, was the worthy winner of the golf tournament Portugal Masters 2021, the 15th edition.

Pieters began the final day sharing a four-shot lead with Frenchman Matthieu Pavon, but his closing round of 68 ensured a fifth European Tour victory and a place at the season-ending DP World Tour Championship.

Following the Vilamoura victory, his first triumph since winning the 2019 Czech Masters, the Belgian shared his delight as he also secured his place at the season-ending Race to Dubai.

“It felt like a long time between victories, but Adam [his caddie] and I worked so hard, and it felt like a deserved one. Two years is a long time. I’ve had a child in the meantime, who talks and runs around; it does feel like a long time. I was going into this week and next week with my back to the wall. I’ve never missed the end of the Race to Dubai and really didn’t want to miss it. I didn’t care if I finished first, second or third. I just wanted to get there; but winning is amazing.”

Final day drama was yet again in evidence

The Portugal Masters’ enviable reputation for final-day drama was yet again in evidence, as the 15th edition enthralled spectators as well as millions watching on live TV across the globe.

Frenchman Pavon seemed destined to lift the magnificent trophy when breezing through his final round to the turn. Having safely navigated the 10th hole, it looked like France was about to celebrate its second winner, equalling Alexander Levy’s 2014 triumph. However, just when it seemed as if the Victoria Course was succumbing to the undoubted skill and artistry of golfing superstars, events dramatically unfolded to provide the excitement for which the tournament is renowned.

At the deceptively dangerous par-five 12th, Pavon put two balls in the water to finish with a triple-bogey. Pieters, having trailed the Frenchman by two shots on the tee, then made birdie to suddenly open up a two-shot difference in his favour. However, water then claimed Pieters’ ball on the 14th, for a three-way tie at the top, and also the guarantee of tense closing stages.

As the leaderboard revolved in dramatic harmony to the unfolding events, Denmark’s Nicolai Hojgaard charged through the field. The Dane’s final round of 64 gave him sight of victory until his dream began to fade, after agonisingly dropping a shot on the last hole. Pavon’s troubles also continued with a dropped shot on the par-five 17th, and again finding water. As Pieters saw his playing partners wilt in the late afternoon sunshine, the big-hitting Belgian took full advantage by demonstrating admirable composure and resilience.

In what proved to be one of the competition’s best shots, Pieters’ sumptuous five-iron to 20 feet on the 17th was duly converted for a two-putt birdie. He then followed up with a comfortable par on the last to finish with a winning score of 19 under par. The two-shot margin of victory left the triumphant Belgian’s closest challengers, Matthieu Pavon, Nicolai Hojgaard and fellow Dane Lucas Bjerregaard, in a three-way tie for second place.

The Danes enjoyed a successful tournament, with Højgaard sharing the lead in the closing stages, while 2017 champion Bjerregaard birdied the 18th to secure his card for 2022. While Bjerregaard was unable to become only the second two-time winner of the Portugal Masters golf tournament by equalling England’s Tom Lewis (winner in 2011 and 2018), his top-100 placing perfectly illustrates the level of his performance at the 2021 Portugal Masters.

England’s representation included Matthew Jordan, who finished as the best-placed English player, on 13 under par, along with Italy’s Nino Bertasio. One shot further back was fellow Italian Francesco Laporta, followed by Spaniard Adri Arnaus, England’s Richard Bland, Australian Min Woo Lee, and Frenchman Victor Perez, grouped together on 11 under par. Ryder Cup captain, and ever-present at the Portugal Masters, Padraig Harrington also returned an impressive performance, with a final round of 67 to tie for 12th place, on 10-under.

While the strong cohort of top-performing Portuguese professionals maintains a distinctly upward trend, the quest for the event’s first Portuguese winner continues. Ricardo Santos, the first Portuguese player to win on home soil in the 2012 Madeira Islands Open, led the home assault at the 2021 Portugal Masters golf tournament in the Algarve. On 5 under par, the Faro-born professional was joined on the same score by Scotland’s Stephen Gallacher, and English compatriots Chris Wood and Jack Senior.

A successful closure full of optimism for the future

As the tournament closed with the sun setting on the Algarve, there was genuine pride at the fantastic success of a hastily arranged event. Originally scheduled for April, then cancelled, only to be reinstated, the tournament was only possible due to amazing work and collaboration.

In what is a fantastic tribute to the concerted skill and levels of cooperation, Rory Colville, in his first year as Championship Director of the European Tour, conveyed his pride and determination to repeat the success of this year’s event.

“It was an exciting tournament. We only had six weeks to set it up and we could once again have an audience, with more than 24,000 spectators, with four beautiful sunny days and a great champion in Thomas Pieters … honestly, we couldn’t be more satisfied. We do not have a set date yet, but we are confident that we will return next year.”

The European Tour’s commitment to the event is also shared by the optimism and determination of Rita Marques, Portugal’s Secretary of State for Tourism.

“After 15 editions, we are very committed to welcoming the event next year and we are doing everything so that Portugal can appear again on the European Tour calendar.”

Such sentiments provide an appropriate conclusion to a very special golf occasion in Portugal. In many ways, the 15th edition of the 2021 golf tournament Portugal Masters in Vilamoura’s golf course has presented unique challenges. Accordingly, though, the style and success of the 2021 tournament entails that it might be considered as the most satisfying ever, allowing everyone to look to the future of not just golf but of life in general, with a renewed sense of optimism.