EDGA tees off 2022 with the ‘Portugal Swing’

The tournament was part of the Portugal Tour, where 79 players battled for victory and the €10,000 prize 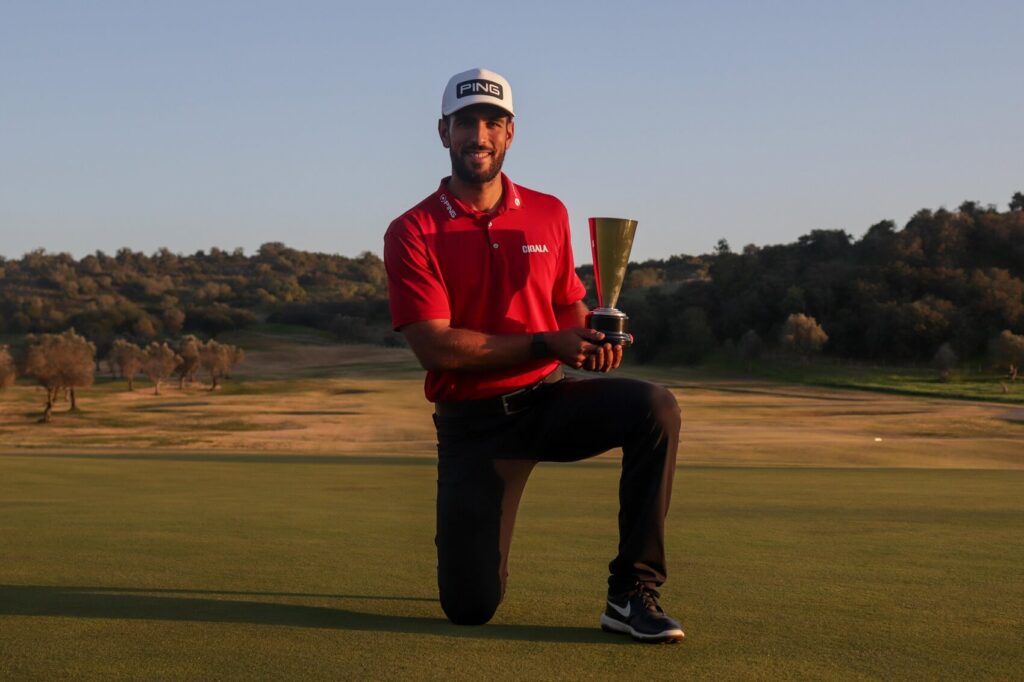 After a forced break of over a month due to the Pandemic, the Portugal Tour (PT Tour) has returned with a triumphal win for Tomás Bessa.

The 2020 national champion had won the last stage in 2021, at the San Lorenzo Open, in December, with 10 strokes below-par. On February 5, he took the top spot once more at the NAU Morgado Open, this time with a result of -8.

At the beginning of December, Tomás Bessa was the best player at the PGA Portugal Players Championship – a professional Portuguese circuit –, which means he is now in his best shape, with three consecutive titles.

“It’s my 3rd consecutive win, I’m very happy. It’s also my 2nd in this circuit, but recently I had COVID19, thankfully asymptomatic,” said the Algarvian pro.

With rounds of 73, 69 and 66, Tomás Bessa overtook the South-Korean Jung-Min Hong with 3 strokes (71+71+69), for a crescendo: “I knew that if I had a good round today I would have more chances. The secret was to not care about the other players’ results and focusing on good shots. And I finished extremely well, with a chip-in to birdie in hole 18. I ended up having a great round of 7 below-par.”

With these two titles, Tomás Bessa equals England’s Jordan Wrisdale, who had won the first two tournaments of the season in Vilamoura, in 2021.

The PT Tour is the only international professional circuit for golfers and high-performance amateurs taking part in Portugal, and there will be six more tournaments until the end of the 2021/2022 season. All tournaments will take place in the Algarve, which should help fight tourism seasonality in the region during the wintertime.

Each of the first six tournaments will have a prize of €10,000, whilst the last one will bring the best of the circuit to the Optilink Tour Championship, from March 14-16, at the Dom Pedro Victoria Golf Course in Vilamoura, with a prize of €20,000, equal to that of the National Absolute Hyundai Championship by the Portuguese Golf Federation (FPG).

The biggest news is that this year, all the tournaments will equally count to the world’s amateur ranking.

“The circuit has the homologation of the FPG, and we are developing contacts to get more invitations to the Challenge Tour,” said event promoter José Correia.

José Correia, a member of the Board of the FPG also underlined that there will be another novelty this year: “Besides the JJW International Pro-Am, from March 4-6 at Pinheiro Altos and San Lorenzo, we will also host the Optilink Pro-Am, on March 12.”

“The partnership with Optilink is a surprise, and will last for three years, starting with a prize of €20,000 for the Optilink Tour Championship in 2022, and a gradual increase in the following years,” he explained.

For the Portuguese golf players, the PT Tour is a golden opportunity to compete in an international tournament before the return of some of the top competitions in Europe, such as the DP World Tour (ex-European Tour), the Challenge Tour, the Alps Tour and the Pro Golf Tour.

“It’s a big circuit, especially for the Portuguese players, and it is an opportunity for us to play in the wintertime when there are no tournaments anywhere else. And to have this at home is perfect. It’s also good for the foreign professionals that can enjoy good weather and prepare their next season here,” said Tomás Melo Gouveia, who in 2021 ensured his spot on the Challenge Tour, the second European division.

Opportunity for the Amateur Golf Players

The PT Tour is not only vital for the professional golf players that aspire to access the main European tournaments, but also a great opportunity for the amateurs that want to climb up the ladder.

“According to the new rules of the amateur status, it is now possible to award non-professional players. In Portugal, the maximum limit is €750. In this context, the PT Tour will award up to three amateurs in each tournament for a maximum of €600. The best amateur player will receive €300, the second-best €200, and the third-best €100. I think the PT Tour is the first and only Portuguese circuit to award a money prize to amateurs in a competition,” said José Correia.

“The PT Tour signed a partnership and a sponsorship with the SGA (Season Golf Academy), where David Silva is the head coach of the programme of selection and development of young golfers that aspire to have a place in the many different circuits. There will be a Merit Order exclusive to amateurs and the top-ranking player will receive a wild card for the Optilink Tour Championship. We see this initiative as extra motivation and an important contributor to the amateur players,” he concluded.

EDGA tees off 2022 with the ‘Portugal Swing’