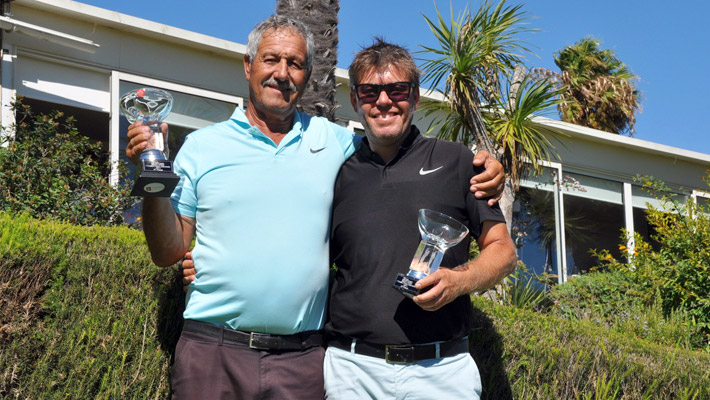 Santo Antonio Golf has celebrated the occasion of its 30th anniversary with a very successful inaugural Pepe Gancedo Trophy competition. Originally opening in 1987 as Parque da Floresta golf course it was designed by the late Pepe Gancedo one of Spain´s most famous golf course architects. The Stableford singles format proved highly popular and the trophy was won by Francisco Borges (pictured here on the left with Santo Antonio club captain Michael Abbot) who returned a very impressive nett score of 38 points. Francisco’s victory was especially poignant because, as one of the first workers on the original course, he was personally acquainted with Pepe Gancedo. The best Stableford gross prize was won by Steve Juster while there were also prizes for nearest the pin and longest drive. Around 100 people attended the prize giving meal where Michael Brown, Parque da Floresta’s first Golf Director, paid tribute to Pepe Gancedo while reminiscing about the inception and construction of the course. The significance of the occasion was also reflected in the presence of Portugal PGA President, José Correia. Golf Santo Antonio is now busy preparing for its next major event, the Autumn Festival to be staged in September. For further details visit: www.saresorts.com.