Back to the Algarve for European School 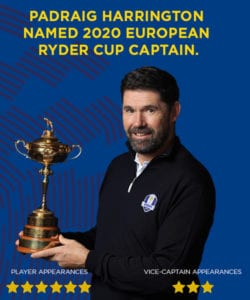 Padraig Harrington has been named European Captain for the 2020 Ryder Cup at Whistling Straits in Wisconsin, USA. The announcement marks the event’s third captain from the island of Ireland, following Darren Clarke (2016) and Paul McGinley (2014). Harrington’s illustrious career includes a memorable triumph at the 2016 Portugal Masters in Vilamoura when, as an ever-present at the event, the Irishman gained a hugely popular victory. Paul McGinley, 2014 Captain, is of course another golfing star with strong Algarve connections, including his world famous teaching academy at Quinta do Lago.
As a player, Harrington made his Ryder Cup debut at The Country Club in Brookline in 1999 and played for Europe in the next five editions, including victories in 2002, 2004, 2006 and 2010. As well as great success on the European Tour, including the Portugal Masters, Harrington is a three-time Major Champion. Also former European Number One, the Irishman has collected 30 titles worldwide and famously secured his first Major in the 2007 Open Championship at Carnoustie by defeating Sergio Garcia in a play-off. He then successfully defended the Claret Jug at Royal Birkdale the following year and became the first European to win back-to-back Majors when lifting the 2008 US PGA Championship crown at Oakland Hills a few weeks later.
Harrington’s extensive experience has equipped him to meet the challenging demands of being Ryder Cup Vice-Captain in the biennial event’s last three editions. First named Vice-Captain by fellow Dubliner McGinley for the victorious Gleneagles event in 2014, he returned to the role in 2016 at Hazeltine National under Darren Clarke, and again last September in France under Denmark’s Thomas Bjørn.
Harrington’s selection as captain of Europe in 2020 was made by a five-man panel: Bjørn, Clarke and McGinley, the three most recent European Ryder Cup Captains; Keith Pelley, European Tour Chief Executive, and Eduardo Molinari, representing the European Tour Tournament Committee.
Harrington’s tremendous pride was unmistakable when the latest honour was announced: “It is a tremendous honour to be named Ryder Cup Captain and I am relishing the next 20 months as we work towards Whistling Straits and Europe’s defence of the trophy. I have played under, and been involved with, many wonderful European captains since I made my debut in the contest 20 years ago and I would like to think that my captaincy will be a mix of all of them. I am very much looking forward to taking on this role.”

Back to the Algarve for European School