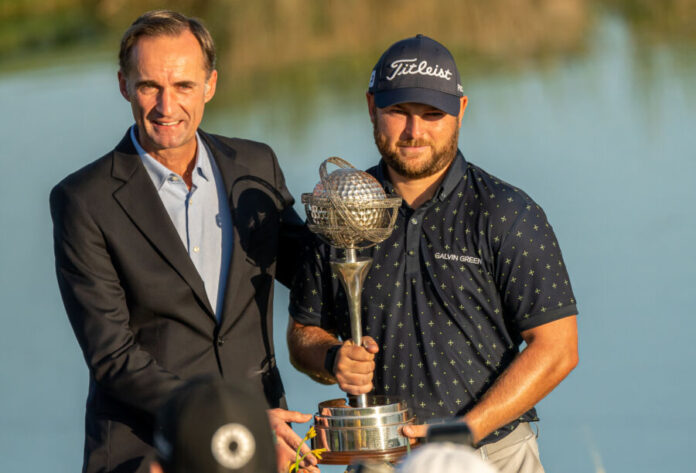 Jordan Smith’s emphatic triumph at the 16th edition of the Portugal Masters maintained England’s love affair with the tournament. The Dom Pedro Victoria course, Vilamoura, was the fabulous setting for the 29-year-old Englishman’s dominant performance, as he led from the first day to the last, for a stunning 30-under par victory. Smith fought off a formidable field, and especially the challenge of Malaysia’s, Gavin Green, whose highly creditable 27-under par came nearest to the Englishman’s 3-shot victory.

Reflecting on his triumph, including scintillating rounds of 62-67-62-63, Smith paid tribute to the determined pursuit of Gavin Green. “I knew that today and every day I’d have to get off to fast starts and make sure I made lots of birdies. I knew there would be a lot of good scores out there and guys trying to catch me. Gavin was trying to get there and he was getting closer and closer but I managed to hold him off.”

The emotion associated with having secured his second DP World Tour victory, following a maiden victory in 2017 at the Porsche European Open was unmistakable. “I said I wouldn’t do this [get too emotional]. There was a lot of pressure that I put on myself, and it is nice to finally get that second win. It’s just amazing. It’s been a long grind for those five seasons, just pushing it out and finally getting over the line today.” Due to wet fairways, preferred lies were in operation over the competition’s four days, and so the 30-under par score is not officially recorded as a tournament record, but Smith’s blistering performance will be forever be recorded as an indelible, historic dimension of Portugal’s premier golf tournament.

On the final day, Smith began two strokes ahead of Green, and the Malaysian kept pace, as both reached the turn in 4-under par. However, Smith then claimed decisive birdies on the 10th and 12th holes, and consolidated with further gains at the 15th and 17th, to close with 8-under par for the day, and the ultimately unassailable 30-under par for the tournament. The magnitude of Smith’s achievement is reflected in the first prize of over €340,000, and a 9th place move into the top 10 on the DP Tour Rankings in partnership with Rolex.

Gavin Green’s career also continues on an upward trajectory, with his 2nd place finish of the season, following an impressive 27-under par, while Finland’s Tapio Pulkkanen claimed 3rd spot, having closed at 22-under par. England’s Eddie Pepperell took 4th place, despite missed opportunities to climb the leaderboard. On the 12th hole, after a missed birdie putt, a frustrated Pepperell threw his ball in the water. However, he then holed a monster putt for birdie on the 13th, and returned a round of 65, for a 21-under par tournament finish. After making the cut for the third day, the home challenge was led by 40-year-old, Ricardo Santos, making his 13th appearance at the tournament, who finished the competition on 8-under par, and 27-year-old, Algarve resident, Tomás Bessa who completed the tournament at 3-under par.

While the glamour and excitement of the tournament inevitably focused on the leaderboard summit, a different kind of drama was unfolding in other areas. With players vying to enter the top 117 on the DP Tour World Rankings and keep their playing privileges for next season, there was both euphoria and heartbreak as a battle for the 117th place continued. Dutch national, Darius van Driel began the week in 118th position, but made the 3rd round cut, to move up one place and retain his card. Van Driel shared his delight and obvious relief when his place was confirmed. “I feel really, really happy. The first two rounds I felt so much pressure and after the third round it was a little bit less because I knew where I could finish to keep my card.” Meanwhile, there was heartbreak for Italian, Renato Paratore who had been on the brink of entering the top 117 placings. When holing a 58-foot putt on 18th, it seemed that his dream for next season might come true. However, with the leaderboard fluctuating, his prospects remained uncertain, and finally there was anguish for the 25-year-old Roman, as his 118th position was confirmed.

On a sun-kissed, final day at Vilamoura, the Portugal Masters had again reinforced its fabled reputation for drama and excitement. With more than 33,000 spectators, and a global TV audience, courtesy of Sky Sports, and Sport TV in Portugal, golfing superstars had graced the renowned Dom Pedro Victoria course. Also, as we already look forward to the 17th edition, DP World Tour’s Chief, Ben Cowen has emphasised the tournament’s value to the nation. “We value the long-standing support of Turismo de Portugal for this tournament, which brings Portugal to our audience on a global scale.” Such unequivocal recognition underlines the real sense of optimism for golf in Portugal continuing to develop and enhance even further its reputation as one of the world’s outstanding, premier golfing locations.

The importance of mind & body to the perfect golf swing

Want to know the secret to better golf? It’s all in the feet